Another great night with our good friends from the Darlington New Club.

On the snooker table wins for the Dunelm Club by Kenny Miller and Tom McCully, Ellis Rowe and Davy Smith, Ray Bonarius and Dave Hodgson and Peter Hammond and Eddie Bliss and wins for the New Club by A Mitchell and T Shephard and S McCabe and J Dixon gave the Dunelm Club a 4-2 advantage.

On the dominoes boards an identical result of 4-2 was achieved by the Dunelm Club with wins for Ellis Rowe and Davy Smith, Ray Bonarius and Dave Hodgson, Stan Colquhoun and Gary Milburn and Peter Hammond and Eddie Bliss. The New Club points coming from R Matthews and D Youlden and A Mitchell and T Shephard.

Tom McCully thanked the New Club for coming and looked forward to the next encounter next year. John Dixon congratulated the Dunelm Club and both speeches thanked Matt and Ash for the lovely food particularly the Chicken Jalfrezi which was made by Ash. 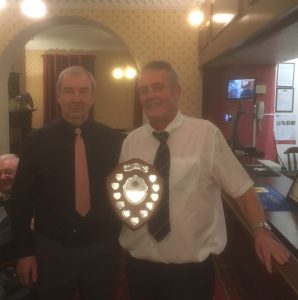